“Disney was very nervous in the beginning.”

Angelina Jolie seems to completely inhabit the role of Maleficent in the upcoming movie of the same name. From the not-quite-human eyes to her disconcerting cheekbones, the talented creatives behind the movie — led by Jolie herself, who’s an executive producer — have fabricated a character who is both beautiful and terrible at the same time. Which is exactly the point.

But it wasn’t easy. No detail, right down to the pointy teeth in the back of her mouth, was overlooked. Prosthetics specialists, makeup artists and scores of costume designers worked together to bring Maleficent to life. And we were lucky to snag a few of them – special effects makeup artist Arjen Tuiten, Jolie’s personal makeup artist Toni G and costume designer Rob Goodwin — to spill some fascinating intel about how they turned Jolie into Maleficent.

The Prosthetics: Those hyper-chiseled, Gaga-esque cheekbones are the first thing you notice when you look at pictures of Jolie as Maleficent. And she had to work to get them. Jolie contacted special effects makeup master Rick Baker and her personal makeup artist Toni G, who conceptualized her look. Arjen Tuiten then worked with Baker and Toni G to make the actual prosthetics. He also did the daily work of applying them to her face. 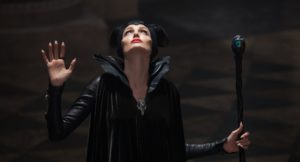 “She’s basically a fantasy creature, but it still had to be very beautiful, you know? It couldn’t just be effects with silly, heavy makeup,” Tuiten said. “Disney was very nervous in the beginning. They were like, ‘Wait, what? Prosthetics on Angelina? Why are we covering her up?’ They were not very keen on it.” Bu Jolie insisted, and she convinced the Disney executives, who anxiously showed up to the daily makeup tests, that it was the right course of action. She ended up with cheek prosthetics, a subtle nose piece, pointy ears and sharp molars. Originally the makeup team gave Maleficent a prosthetic forehead and chin as well, but the overall effect was too “devilish” so they scrapped it. “We didn’t want to make her a caricature,” Tuiten explained.

The Perfect Skin: In the movie, Maleficent’s skin isn’t quite as dramatically pale as it appears in the highly stylized Mert and Marcus-lensed movie posters, but it’s also not green like the original animated Maleficent’s. “[Angelina] didn’t want everyone to be looking at a green, overly made-up face. We thought it would be distracting,” Toni G said. But it’s not natural, either. She stippled on MAC Select Cover Concealer with a wet sponge in a color paler than Jolie’s natural skin tone without any blush.

According to the two makeup artists, it took about three hours to apply the makeup and one hour to remove it every day. The actress was in full makeup for 70 days, often for 16 hours at a time. Toni G used Kiehl’s Blue Astringent to prep Jolie’s face before applying the prosthetics to remove oil, but that’s all she could use, because otherwise the silicone wouldn’t stick. The team removed everything at the end of the day using a mixture of coconut and argan oil.

The Red Lips: “We tried many, many lipsticks,” Toni G said. They finally settled on one color, MAC’s Pro Longwear Lipglass in Anthurium, which you can get now as part of MAC’s Maleficent collection. “It wasn’t pink and it wasn’t completely orange, it just had that true red tone,” Toni G said. She estimated that they used about three tubes over the course of shooting.

The Creepy Eyes: Toni G was inspired by the colors of the labradorite stone, a mineral which has a swirly, metallic, oil-spill finish. Those colors made it into Maleficent’s eye makeup palette and the director loved it so much that he incorporated the stone into Maleficent’s staff, according to Tuiten. It also inspired the color of her creepy contact lenses, which were hand painted by contact lens artist Cristina Patterson. (Rick Baker told Allure the pupils were inspired by goat eyes.)“The lenses mimicked the actual colors [Jolie] has in her eyes. They just gave her a bit more magic,” Toni G said.

The Nails: Jolie’s nails are appropriately long and sinister throughout the movie, but in some scenes, be on the lookout for a bit of sneaky nail art. According to Tuiten, Jolie suggested painting the underside of her nails – the tops of which are painted a bone color—red, which calls to mind Adele’s famous “Louboutin” manicure she wore to the 2012 Grammys. In film stills, Jolie’s nail undercarriage doesn’t seem to be painted red in every scene, so it will be interesting (nail art drinking game?) to watch for it in the film.

The Costumes: Rob Goodwin, a shoe designer and leather worker, was brought on later in the movie-making process to add “sharper edges” to the costumes. “The danger is with characters like Maleficent, you can slip into something that’s fetish-y and I didn’t want that. I don’t find that interesting – it’s a bit pedestrian,” Goodwin said. “You want to make something more elegant and savage. That’s how I approached it. We tried to make her both brutal and couture.” The facial prosthetics and horns “nudged” him and his fellow designers  Manuel Albarran and Justin Smith to create wardrobe pieces that were more angular. You’ll see exaggerated shoulders and collars on all her various outfits as a result, including one inspired by the shape of a pelvic bone. “With Angelina you can get away with making things more masculine because she’s so beautiful. She can counter it,” Goodwin said. Texture plays a big part in the overall costume design as well. Goodwin, being a shoe designer by trade, admitted that he tried to sneak as much leather in as possible. They used cow leather, sting ray and even ostrich shin leather. “[Ostrich shin] is a really fantastic leather. It’s used sometimes in shoes and bags. But it looks like scales. She was winged and she had a bird companion so it combined all those aspects of her character,” he said. The designers didn’t want to use anything that looked manmade – her accessories were all bone and bead. “It had to look like she could evolve these things,” Goodwin said. And what about those horns? Jolie’s team placed a skull cap over her hair, and the horns attached with magnets so that they could be removed easily. (Rick Baker told Allure that McQueen designer Sarah Burton had a hand in the horn design.) Jolie told Entertainment Weekly that there were different horns of varying size and heaviness for different shots. The horns added an extra foot of height, and her shoes an extra five inches, adding to the overall imposing image. 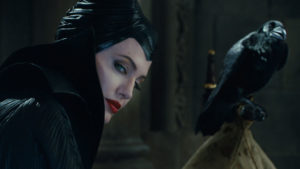 Speaking of shoes, they presented a challenge for Goodwin. “You don’t want Angelina’s heel snapping off and she breaks her ankle!” he said. “Shoes are always technically difficult because you want to make it as light and airy and beautiful as possible but you still have to be able to run and climb in them. There were a lot of times where we were customizing existing shoes or working with an existing base and building things on top to make them look ‘organic.’” All three experts agreed that Jolie was the driving force behind Maleficent’s overall look, pushing them all to be edgier and riskier. “[Jolie] is so aware of not only the film-making process, but fashion as well. She’s probably also the same age as all of us, so during discussions and fittings we’d discuss images that we’d seen. We had the same reference points,” Goodwin said. “I was quite impressed by how much Angelina had that breadth of knowledge. She really had a sense of where the character needed to go. Sometimes we might have made it a bit safe and she wanted to make it more angular, and we’d push the boundary a bit. We’d come back with something much harder.”

Because everyone knows what happens when you say “no” to Maleficent. 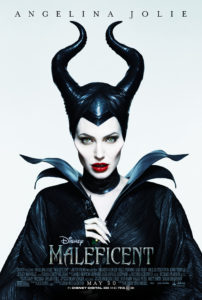